One of my absolute favourite features of Stitchmastery is the ability to generate written instructions for charts. After all, not every knitter likes working from charts, and it’s good for a designer to provide the option of working another way.

Every designer has their own style sheet, their own format for instructions, things like whether to use “k” or “k1” or “k 1”, when you are asking the knitter to knit a single stitch.

I will admit – somewhat sheepishly – that when I first started using Stitchmastery, I would just generate the written instructions and then do a whole load of searching and replacing to make things look the way I wanted to. But I’m here to save you that effort! Stitchmastery allows you to customise the format and style of the generated written instructions, in all sorts of wonderful ways.

To make this easier, make sure you keep the Output Text pane visible when you’re working. And do make sure you have your own namespace set up. (See Chapter 5 of the User Manual for help with that.)

The first thing you need to do is create your own style sheets. You’ll need to create two – Written and Text Template.

In Preferences, in Stylesheets, click on Default Written, and then click on the “Duplicate” button. You’ll be asked for a name. And do the same for Default Text Templates. You can see here I’ve got two new ones, called KateWritten and KateTextTemplate. 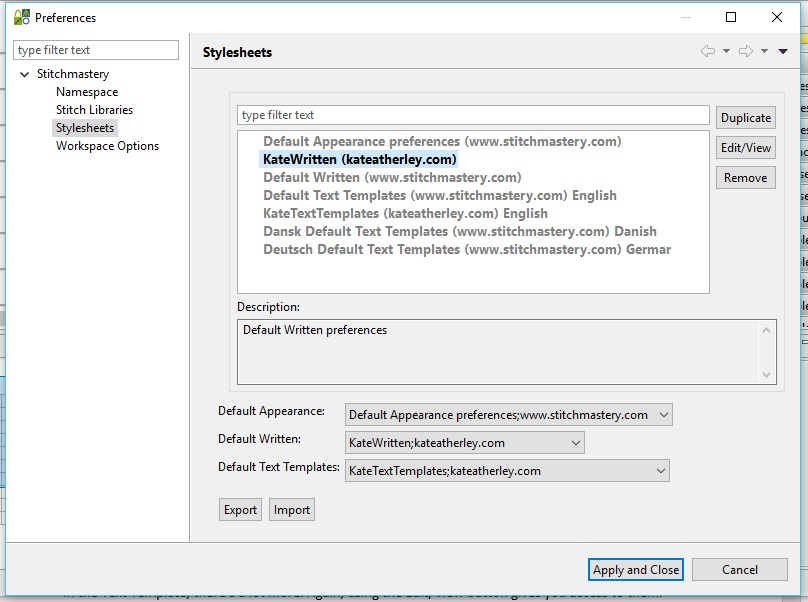 You can then edit them, with the Edit/View button. In the Written template, there are only a few choices, and they’re pretty straightforward.

These options in the Written template set some of the high-level formatting standards, and these are applied no matter which Text Template is used.

In the Text Template, there’s a lot more options, the finer details. They’re grouped into tabs, to make it easier to find them. 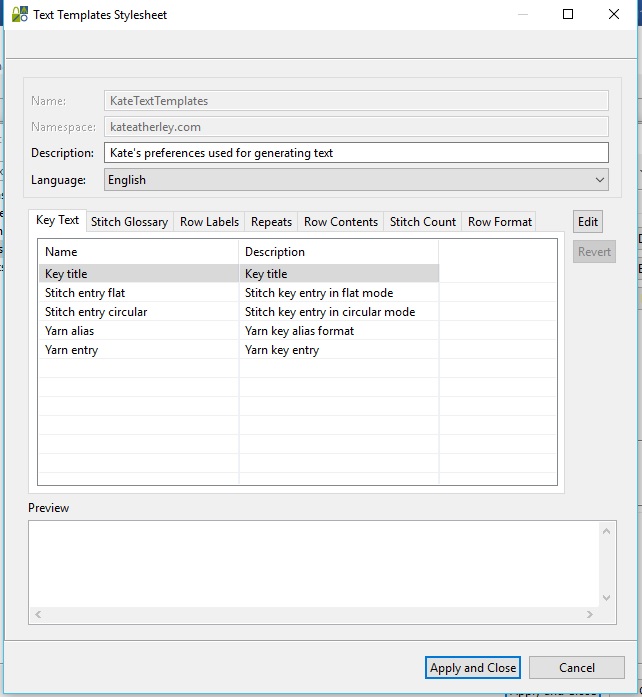 If you click on any of them, you’ll get a preview of the code in the box at the bottom. 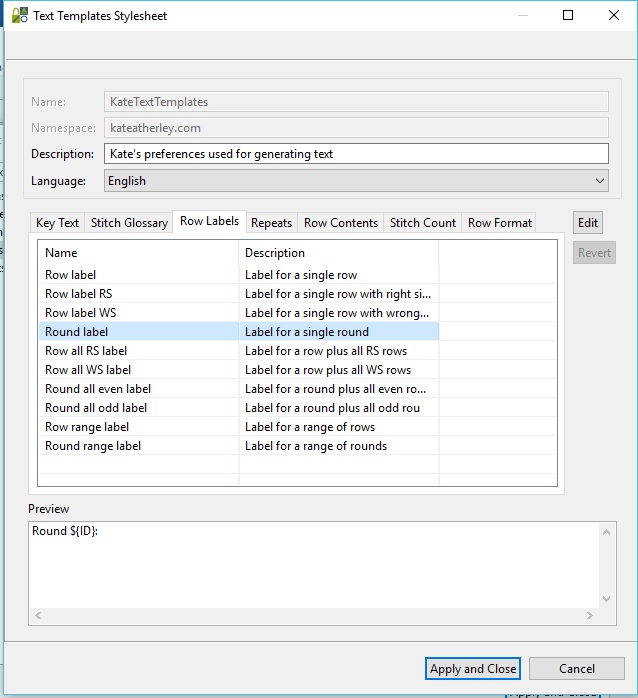 Click on the Edit/View button to make changes to that particular entry.

It might seem a little complicated at first, but you’ll soon get the hang of it! All of the formats are written out using variables – these are placeholder names in computer code. When working on your chart specifically, the program reads the placeholder names and substitutes the actual value.  Anything you see in this format

should be left alone. That format indicates that this is a number or piece of information that the software supplies. The rest is fair game!

In the example of Round label format, it’s given by default as

Leave the ${ID} bit alone – that is the code that allows the program to substitute the round number – the computer knows that as the ID. What you can edit is how the rest of it appears.

What you get with this default is the following – if it’s round 12, for example:

But what if you want to abbreviate Round to Rnd. Just edit that bit of the text:

Here’s some of the sorts of things that I like to change… working through these will give you a sense of how it works. For any of them, once you’ve found them in the tabs, click on the individual entry, and then click on the View/Edit button to make changes.

Repeats
By default, for a repeat, Stitchmastery uses x for indicating when an instruction is to be repeated, e.g. “x 3”. I prefer spelling it out like this: “3 times”.

In the Repeats page, look for Times qualifier, second from the bottom. By default, the format is

meaning that if something is worked 5 times, it will appear in the instructions as

If you delete the x (and the following space), and then add a space and “times” after, you’ll get this in my written instructions

Stitchmastery puts any stitch count in brackets after a row. I don’t use brackets. Under Stitch Count, edit the first entry, Stitch Count. I removed the brackets. If you’d prefer a dash, put that in.

Instructions for a Full Row or Round

When a row or round is worked the same way all the way across, Stitchmastery writes out the instruction as, for example, “Knit.”

To change that to “Knit all.”, in the Row Contents tab, edit the option for “Work all stitches”. Add a space and “all” after the ${StitchName} variable. You don’t need to add the punctuation, that’s already taken care of. Although if you want to change that, it’s part of the Row Format settings.

Obviously, there’s lots of customizations you can make. Chapter 4 of the User Manual details the many variables available for use. And you can do it without worry – that handy Revert button removes any changes you made, so if you make a mess of things, you can put it back.

The Revert button is only active when you’ve selected an item that you’ve edited, by the way. If you’re not able to click on it, it means that the setting hasn’t been changed.

When you’re creating a New Chart, make sure that you select your appropriate Written and Text templates in the setup step, under “Diagram Properties” tab. 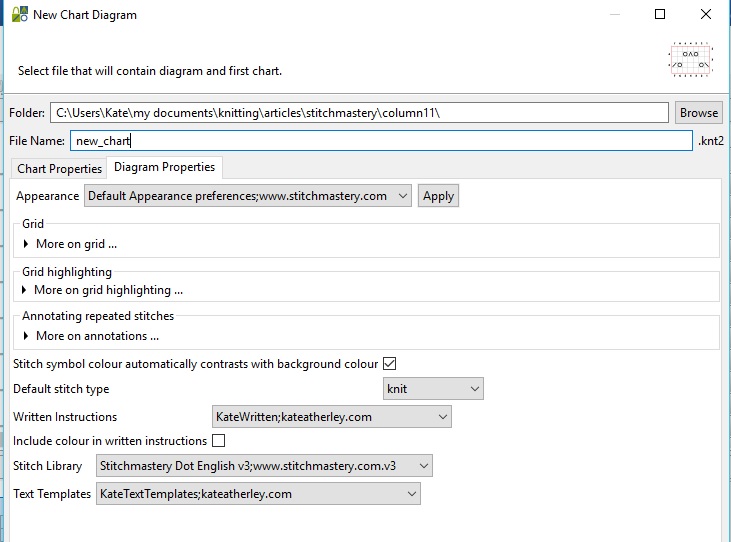 You can also change it later, in the Edit Diagram Properties in the Diagram menu.

There is one aspect of the written instructions that you might find puzzling at first: the concept of implicit and explicit repeats.

You can, using the menu, group stitches together in repeat. This allows to you create more condensed charts.

For example, instead of the larger chart on the left –

creating a repeat allows you to have a smaller chart, as shown on the right. (Check chapter 6 of the User Manual for instructions on how to set these repeats.)

Note that if you don’t create explicit repeats, Stitchmastery is clever enough to spot repeated instructions and group them together – saving space in the written instructions, and making them easier to read. That’s what we mean when we say implicit repeat – these are the ones that Stitchmastery has spotted on its own.

There can be differences, however. Look at the written instructions that have been generated for the two charts above.

In the first one, Stitchmastery has organized the instructions into repeats, to condense them. You’ll notice, however, that the repeats don’t line up. If you were to place brackets around the repeated stitches, they’d be offset on the right and wrong side rows.

This isn’t necessarily a problem, but in a more complex pattern, it might make the instructions harder to follow.

In the second one, because you’ve set the repeats yourself, the bracketing and the border line up perfectly.

If you are setting repeats in your chart, make sure you use the Repeat feature, rather than just the border. This way, you’ve got control over what bracketing Stitchmastery uses, and to make sure that your written instructions match your chart.

When we launched Stitchmastery Version 3, one of the key additions to the programme were German and Danish translations of both the system Stitch Libraries and the Text Templates stylesheets. We were able to add these thanks to designers who helped us with the translations. This addition to the software means that anyone who would… END_OF_DOCUMENT_TOKEN_TO_BE_REPLACED

This blog post details the changes made to the software for Version 3, and how to download it – the information is all relevant for Version 3.0.2 which is now available. The upgrade is free for existing customers – see below for instructions on how to use your current activation key as a coupon code.… END_OF_DOCUMENT_TOKEN_TO_BE_REPLACED