As I mentioned in my first column, it’s most knitter-friendly to, where possible, include both written and charted instructions for stitch patterns, when you’re writing up your pattern for publication.

But you can’t just paste them both into your pattern, you’ve got to make sure that you’re instructing knitters how to use them. It’s no good if you have a chart but no information about what to do with it!

To show you what I mean, let me give you an example from a pattern I recently edited.

The designer had written the following:

I was with her up to here. I loved that she’d made a note to explain what was happening, so the knitter would be prepared.

And then I looked at what came next.  There was the chart, nice and tidy: 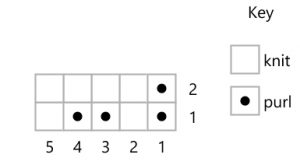 And then these sets of instructions, two rows for each size.

Although her instructions were entirely correct, at no point did she explain how the chart related to the written instructions. Now, the pattern stitch is pretty straightforward, and if you’re comfortable reading charts you can likely work out how to deal with it, without fuss. The chart, after all, is just the instructions in the brackets.

But, as I told the designer, if she was going to write it out like this, why had she bothered providing a chart? Written this way, the chart was basically a decoration, no more!

I suggested the designer consider the following structure:

Which has the side benefit of being significantly more concise, and tidier! After all, that’s a big part of the reason we provide charts in patterns.

And then, I suggested she actually write the written instructions out for the pattern stitch, beside the chart, like so:

and then do the following:

If you’re doing this, I also recommend give the pattern stitch a name that doesn’t include “chart”. I know this seems like a small thing, but, to steal a phrase from the software industry, it’s more user-friendly! After all, some knitters are nervous about reading and working from charts, and to be told that they’re working a chart, even if you offer written instructions, might put them off.  If it’s phrased like the example below, how is the knitter to know you’ve also provided written instructions?

A knitter flipping through your pattern before deciding to purchase might not realize that both options are available. I often organize things in a layout with the glossary, charts and stitch pattern information all grouped together in the last couple of pages, which can easily be missed on a first glance through.

If you’ve gone to the trouble of creating both, make it clear they’re both there. You’ll broaden your audience for your pattern!