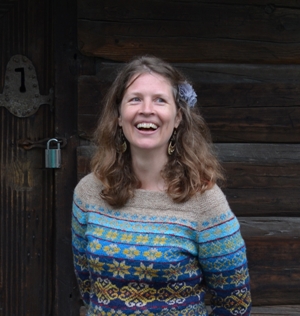 
1) When did you start designing? Could you give us a potted history of your path through the industry?
I see that I put in my Ravelry profile that “I have always made my own patterns, but only after I joined Ravelry, I started to write some of them down.” I realized a while ago that this is not entirely true, because I found notes I made for patterns from 30 years ago. But obviously, Ravelry made it possible, and even easy, to set up patterns for sale, which I did for the first time eleven years ago with my Phantasy hat. From there it has evolved slowly but surely. I was thrilled to have a couple of designs published in Twist Collective, my Tuin sweater and the Latifolia hat and mittens. I have loved going to Shetland Wool Week, and it has been fun to teach a few classes and last year also be part of the SWW Annual with my mitten pattern Skålavåg, which I made using Stitchmastery charts. I don’t think I’ll ever stop designing, but I have no plans of quitting my day job. At the moment, I have one day a week to spend for my knitting design, so it’s probably more a hobby than a second job.
2) Do you have any recurring sources of inspiration or unusual muses?
Tricky question. I can be inspired by anything, a pattern on a teabag, a fairy tale, a flower meadow. I have browsed through my design page on Ravelry, to see if there are any recurring themes. I think nature and colour are two important sources of inspiration. I’m also inspired by patterns – everything from Fair Isle patterns to tiles to wallpaper, and more.

3) When you have an idea, do you always work to a set workflow (e.g., swatch-knit-chart / chart first then knit) or does your approach change with each design?
I definitely do not always work to a set workflow. It very much depends on the idea where I start. But I have often used a hat as a “swatch” for colour, motifs and gauge when planning for a larger project like a sweater. And I think I can say that I’m slowly getting more organized with my design process. More and more I try to write the pattern as I knit my sample, instead of having to figure out what I did afterwards, which obviously is a much more tedious approach.
4) What made you choose to use Stitchmastery? Is there a particular feature you use most regularly or couldn’t do without? And is there anything you wish Stitchmastery could do?
I first heard of Stitchmastery when I met Cathy during Shetland Wool Week 2012. I used Excel for a long time, but after a while I wanted a software with more knitterly functions, and I decided to purchase Stitchmastery. One of the features I love most is the possibility to mirror a selection – that is super useful. I also like that you can make annotations of repeated stitches in the chart, for my two upcoming sweater patterns the test knitters have been happy about that. I mostly design colourwork patterns, but it’s fun with a little bit of lace and cables too, which is easy to chart with all the symbols available in Stitchmastery. The fact that Stitchmastery also checks your stitch count, and tells you if there are errors, is great.
There is one thing I miss. As I said, I mostly design stranded colourwork pattern. If I could mark a selection, and easily change the colours in that selection, I would be very happy. Adding that feature would make Stitchmastery perfect in my opinion.
5) Please tell us about your latest publication or next exciting project!
My latest publication is a cardigan called Svetlanas kofte with charts from Stitchmastery. One of the afore-mentioned upcoming sweater patterns is Abanico where, as I said, the annotation feature came in handy.
You can find Tori on Instagram as @torirotdesign and her designs are available from Ravelry at ravelry.com/designers/tori-seierstad. 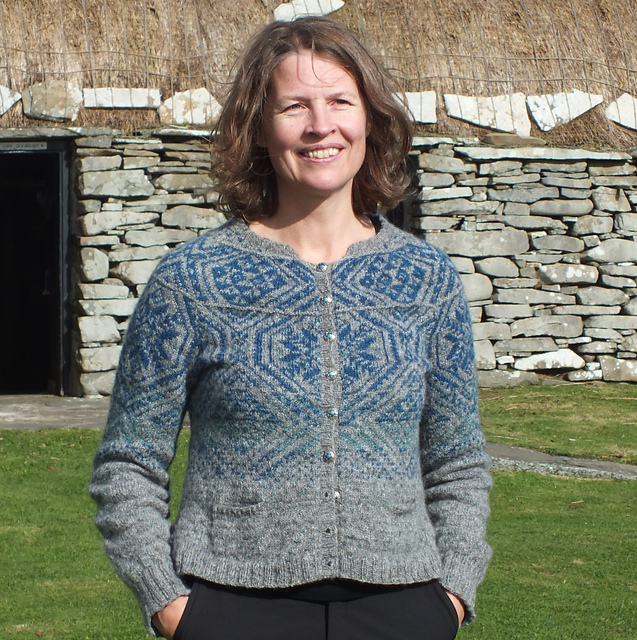