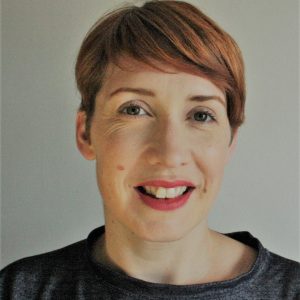 Last year we ran a survey of Stitchmastery users and one response particularly caught our imagination – someone told us they would like to hear from other Stitchmastery users and how they make use of the software. We’re delighted to bring you a series of interviews with designers, tech editors, magazine editors and teachers – we hope you enjoy reading them!

1) You’ve worked as a designer, tech editor, magazine editor and teacher. Could you give us a potted history of your knitty background?

There are tailors and seamstresses going back generations in my family – my great-grandmother was seamstress to Lady Winston Churchill – and, probably because of this, I wanted to work in fashion from a young age, but my parents weren’t so keen.

Long story short, I ended up studying law, and textiles remained a hobby only. After uni I trained as a journalist and got a job on a big regional newspaper, working my way up to deputy news editor. I loved it but there was a lot of pressure and the hours were insane.

On the newsdesk we would work in very intense bursts – when we were trying to get the latest edition out we would sometimes only have 15 minutes to write the front page. But there were occasional lulls while we were waiting for the reporters to file copy. I took to knitting in these little breaks to ease my stress levels. My colleagues thought I was mad!

After seven years I was approaching burn out, so I left the paper to work for a magazine publisher. Through that I met Jen Arnall-Culliford, when I joined the company’s knitting group. Jen was then technical editor of The Knitter and encouraged me to start designing properly and to try tech editing, which I loved because I’m a total maths geek. When Jen left she urged me to apply to the magazine and all of a sudden I was deputy editor! My role was mainly a technical one, but also included commissioning designs and planning photoshoots, along with then editor Juliet Bernard, another amazing mentor. At the same time I started teaching knitting, crochet, and sewing at The Makery in Bath, but without Jen and Juliet I’d probably have a very different career today!

I spent three years on the mag before moving to Knit Today as editor, tasked with redesigning the magazine from scratch. It was an exciting project, but in a crowded market it was sadly just a bit too late to save the title. When it closed in spring 2016 I went freelance and since then I’ve worked as a designer, writer and tech editor. I also teach at A Yarn Story in Bath and mentor a handful of newer designers and tech editors. It’s my dream job really; I have a lot of freedom, I get to work with really interesting people, and I’m learning new things all the time.

2) When designing, do you have any recurring sources of inspiration or unusual muses?

As a tech editor I often buy patterns for research rather than specifically to knit them and about seven years ago I bought an out-of-print knitting book; Michael R Pearson’s Traditional Knitting [now available in a new edition] as it had a section on Fair Isle I was interested in. There were other chapters on arans and ganseys but I didn’t look at them until months later. When I did, Pearson’s story of the history of the gansey captivated me and I quickly devoured every book I could find on the subject.

I was still at The Knitter then, so I decided I was going to design a traditional gansey for the magazine. I must have spent about four months on it – I was completely obsessed – and it’s still one of my favourite designs. Ever since then I have been a gansey nut and much of my recent design work has been driven by researching their history.

Aside from ganseys, I love Scandinavian colourwork and bold colour plays a big part in my designs.

3) When you have an idea, do you always work to a set workflow (eg. swatch-knit-chart / chart first then knit) or does your approach change with each design?

I start by developing a stitch pattern, charting several repeats to give me something to swatch from. Charting also helps me think through how the design will work. I want my designs to be inclusive in terms of sizing and interesting to make. Charting helps me figure all that out.

Next I swatch. I usually make pretty big swatches, maybe 20cm x 30cm, to help me understand how the fabric will drape and wear and what the knitter’s experience will be. Once I’m happy with the swatch I’ll sketch the finished design, work out the grading specifications and then write the pattern. Writing the pattern is usually the quickest part.

Having said all that, my most popular pattern, the Stashbuster Sweater, was never meant to be a design. I was knitting it for myself and showed the team on Knit Today, who encouraged me to put it in the magazine. So that one was very much made up as I went along! 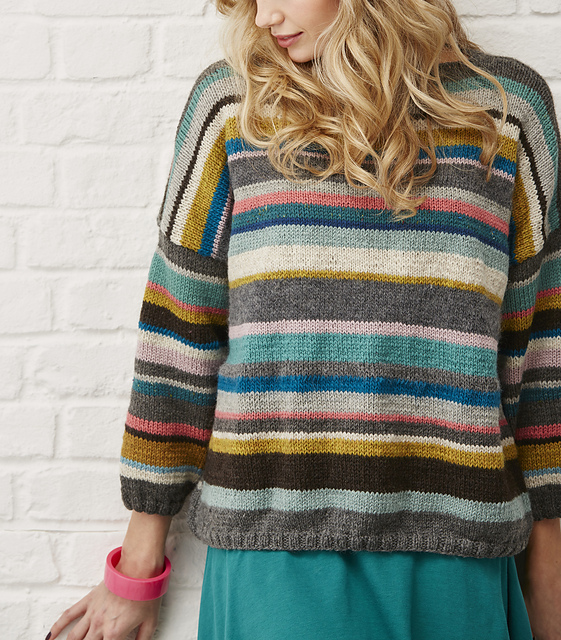 4) Similarly, when you are tech editing, do you have a normal process or are you lead by the designer/the pattern you are given?

I try to approach a pattern as a knitter or crocheter would. That means I don’t usually do much more than a quick scan for obvious problems before I start checking it, which may sound odd, but I want to have an experience that’s as close as possible to how the maker will experience it. And most people don’t read patterns through before they start making them, although I always do!

If it’s a designer I work with a lot and I know what to look out for, I will correct any style issues first, so that it’s out of the way, and also look for areas of potential confusion. Next, I’ll make sure the maths checks out and that the grading is appropriate, which is often where patterns fall down. If there are complex stitch patterns I may quickly chart them out, as I’m a very visual person and I like to see what I’m working with.

Once I’m happy I’ve given everything a thorough check and that the grading is right (which may mean suggesting rewrites for some sections) it goes back to the designer. I’ll get their comments and confirmed changes and then let it sit for a day or so before giving it another read through.

Although yarn companies have used graders and pattern writers for decades, they have not been so frequently used by independent designers. That’s changing now, as the most popular designers have so many demands on their time, and so these days I very much specialise in grading and pattern writing, which requires a combination of my design and tech editing processes. Grading is my favourite area of technical work.

5) What made you choose to use Stitchmastery? Is there a particular feature you use most regularly or couldn’t do without? And is there anything you wish Stitchmastery could do?

I started using Stitchmastery when I joined Knit Now as a tech editor a couple of years ago, as it’s used by everyone on the magazine. While I never rely on it for pattern-checking, I like that you can use the Outline function to quickly see whether your shaping maths is right. It’s particularly handy for complex lace, where it’s so easy to put a yarnover in the wrong place and screw everything up!

I also love that you can easily make charts that are an irregular shape, for example, when creating a layout for mittens or a shawl. I use Adobe Illustrator for some of my other clients and, while it’s a really powerful programme that’s great if I’m grading a paper sewing pattern for example, it takes longer to set up a chart than Stitchmastery and is generally a bit more of a faff.

I’m wary of listing things I wish Stitchmastery could do, as I suspect it’s more a case of my not having discovered a particular function yet! I’d love to have more time to delve deeper into the custom coding side of the software.

6) Please tell us about your latest publication or next exciting project!

When I went freelance my main worry was getting enough work. Happily, that didn’t turn out to be the problem! These days I am typically fully booked four to six months ahead and often have to turn down interesting work because of this.

In early 2018 another tech editor I know, Amelia Hodsdon (on Instagram as @woollenwords) approached me about teaming up in some way. Although we are both experienced tech editors we specialise in different areas, and our skill sets are really complementary. Amelia and I were each looking at how we could take things to the next level, and this seemed like the perfect solution.

We’ve spent the last six months working out the details and have now launched a new business together, Light Work Collective.

Light Work is a one-stop shop for knitwear designers and yarn companies who are looking for expert support. As well as tech editing, grading and pattern writing we can copyedit, proof, layout and upload patterns, and provide other services like graphic design, illustration, marketing and social media consultancy through a select group of associates. We also offer project management, which is a great option for designers looking to publish their first book, who don’t know where to start, or established designers who want to outsource some of their current work.

It’s an ideal set up as it means we are no longer confined by how many hours we personally have in a day, and we can help our clients really concentrate on the tasks they enjoy and shed the ones they don’t. The industry around independent designers and smaller yarn companies is changing all the time and we’re excited to be part of that growth.

At the same time as all this I’m also working on my first knitting book, which will be published in autumn 2019. So it’s been a packed year, but I’m thrilled about what’s to come! 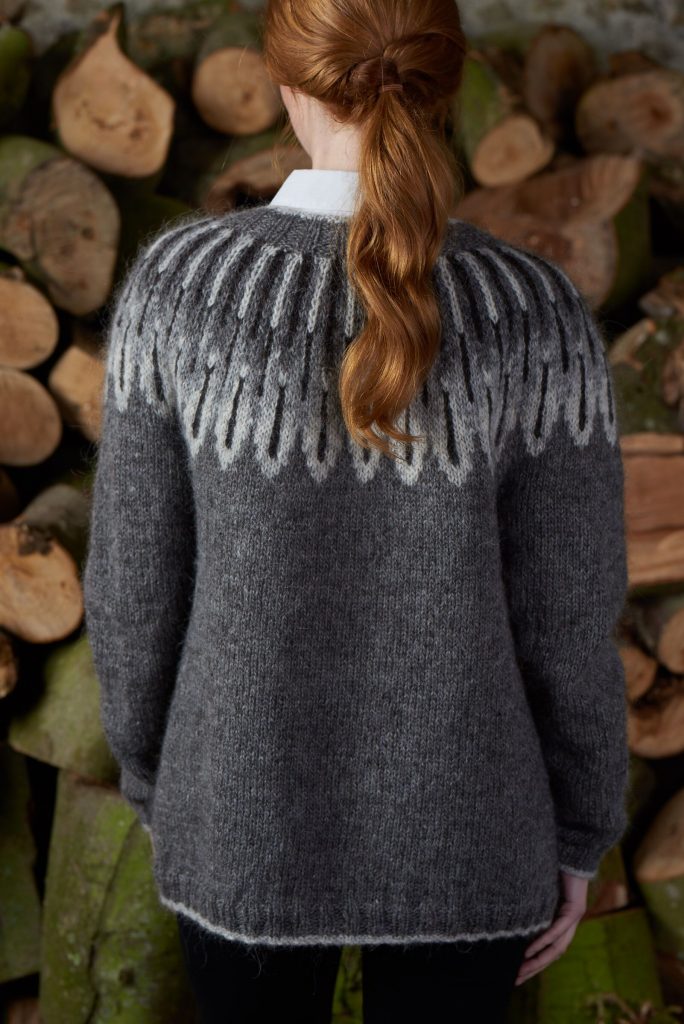