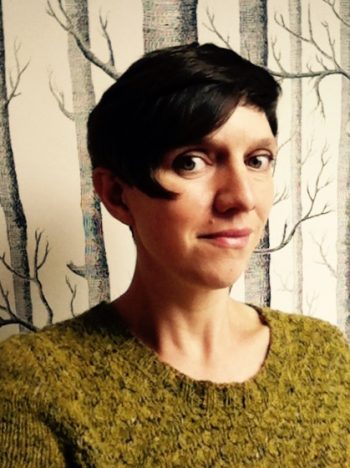 
1) When did you start tech editing? Could you give us a potted history of your knitty background and how you got into your career?

In late 2015, I was leafing through a copy of The Knitter, and stopped at the credits page. What was this job “technical editor”? Was this the new direction I should take?

Knitting was part of my childhood in as much as I would ask my mother for a jumper with very precise requirements (Britpop-themed stripes; something that didn’t flout school uniform guidelines enough to get in trouble but that also signalled mild rebellion, etc) and some while later one would appear. It wasn’t until a weekend in 2007 when my flatmates and boyfriend were away that I set myself the challenge of learning to knit. Somehow I had found the My So Called Scarf (by Alison Isaacs) online and fixated on it.

Luckily for me, Loop was then (in its Cross Street days) around the corner from my flat, so I equipped myself with a learn-to-knit book, yarn and needles, and spent that weekend totally failing at knitting a scarf. Things stayed pretty casual, though ambitious, on the knitting front until friends started having babies, and I got into sourcing woolly yarn from their local areas to knit together into haps (the Tweed Baby Blanket by Jared Flood – whatever became of him?! 😉 )

Ravelry was my go-to website whenever work got slow, and I set up a lunchtime knitting group (Woolly Liberals, later ScarfAce). In 2015, I had to take a long time off work because of stress and depression, and a couple of local knitting friends invited me on a trip to a new yarn shop. Walking into Wild and Woolly that March was a turning point in my life – not only did Anna’s warm welcome and wall of colourful yarns ignite a fire that I thought had gone out, the community of crafters, dyers and designers provided support, friendship and later work opportunities.

Back to this job, “technical editor”. I’d decided to leave the Guardian, where I had been working as a magazine production editor and co-editing the style guide, in search of a more flexible and autonomous work life. Technical editing looked as though it could be the answer: I had the professional skills, but no qualifications, however. I took Joeli Kelly’s tech-editing course, and attended a workshop by the wonderful Kate Atherley, and began editing patterns for designers I knew through Wild and Woolly, or had met at knitting events.

I had made a great friend in Helen Reed (aka The Wool Kitchen), and I helped her to produce designs with her beautiful yarn. Working on Helen’s busy stall at a couple of Edinburgh Yarn Festivals gave me the chance to meet many famous designers and other wool industry people, and word of mouth (thank you, lovely recommenders!) has brought me many fascinating projects since then, with clients from London to New Zealand, and back via the US and Scotland.

Exactly a year ago, keen to be able to take on really hefty commissions, and to have someone to talk to while doing so (freelance life can be a bit lonely), I co-founded Light Work Collective with Rosee Woodland, another experienced editor (you can read more about her in the Stitchmastery interview she did a year ago: https://www.stitchmastery.com/interview-series-4-rosee-woodland/). Her background is in magazines, and she specialises in writing and/or grading patterns for top-level designers, so our skills are really complementary and it’s lovely having a colleague to dream big with and bounce ideas off. We provide services for publishing houses and designers, and have worked on two major books now, with a string of regular clients who value our grading + editing skillset. Rosee is brilliant on construction and fit; I love the meticulous process of checking every last instruction and making a pattern user-friendly and consistent, both internally and within a collection. Really love it.

My work at the Guardian was always about finding the truth within words, and upholding that for the benefit of readers – which is why I now always ask designers to be really clear about what kind of “ssk” they recommend the knitter uses. The knitter can then choose to go their own way, but at least they know what the designer truly meant.

2) Would you say your personal knitting projects impact on your tech editing work?
I usually have a variety of projects on the go, all suitable for different knitting occasions. Socks for buses/waiting rooms, some sort of voluminous shawl – and a complicated something-or-other to make sure I am always learning, whether that is an interesting construction or a tricky technique. When I am knitting, I turn off my editing lasers, and pay almost no attention to whether or not a pattern is consistent, or if it could be written or laid out more clearly. It’s always a thrill when I work for a designer whom I already admired, but I tend to separate my knitting from my day job so that I can preserve it as a relaxation.
Photo by Helen Reed. Shawl is Cosmic Dandy by Julie Dubreux.
3) When you start a new tech editing job, do you always work to a set workflow or does your approach change with each design or client?
I have a lovely and extensive checklist that I have honed over time and use for every project, to avoid worrying about whether I’ve forgotten anything. My usual approach is to go through checking any numbers, entering the bones of the pattern into Excel and marking up any areas of the pattern that feel awry. I then come back and do a seriously intense read to catch everything, and then do a final read when I am checking the abbreviations. Nowadays I avoid printing out patterns, to save paper, instead using two computer screens, so when I get the chance to work on hard copies (on printer proofs, for instance), I relish it. For Granta Books, I did a specialist proofread of Esther Rutter’s This Golden Fleece and at one point my desk was covered in piles of proofs, dictionaries and pencils. Bliss.
A selection of the knitting-related publications Amelia has edited or otherwise helped to produce.
4) What made you choose to use Stitchmastery? Is there a particular feature you use most regularly or couldn’t do without? And is there anything you wish Stitchmastery could do?
The customer service that Stitchmastery offers is second to none. Via the Ravelry forum or email, or by referring to the manual, it seems there is nothing that can’t be sorted out. The charts are always so clean and clear, with attractively simple symbols. I so admire the brainwork that has gone into creating, maintaining and expanding it. I have been using the “chart diagram from written instructions” feature a lot over the past couple of months, to create charts for a client who doesn’t enjoy that side of things, and it’s a very useful feature. Is there anything I wish Stitchmastery could do? Be used by every client I have, as it would save a lot of time in terms of checking chart instructions. And in me recommending that they use it next time.
5) Please tell us about your latest publication or next exciting project!
This month, watch out for Bristol Ivy’s new book, which I tech-edited. My desk was covered in folded pieces of paper, trying to work out Bristol’s clever constructions. In terms of what Light Work Collective has been up to, we have just finished a 21-design book for a Erika Knight (to be published by Quadrille in 2020), and are also anticipating Shetland Wook Week next year, and the launch of a book there by a terrific Fair Isle designer – both of these major projects made extensive use of Stitchmastery software. I’ve been emailed this week by an exciting designer planning their first book, and had a great meeting with someone else wanting to know all about the process of indie publishing — but these two are under wraps for now!
You can contact Amelia by emailing woollenwords@gmail.com, or via social media by searching for @woollenwords. Her website is woollenwords.net. Learn more about LWC at lightworkcollective.com or follow @lightworkcollective.