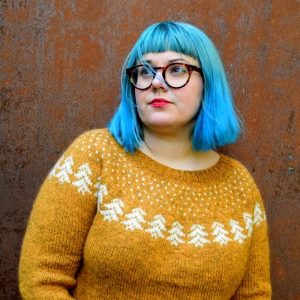 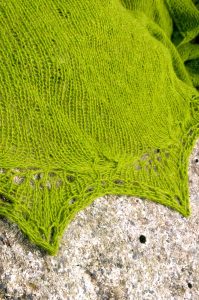 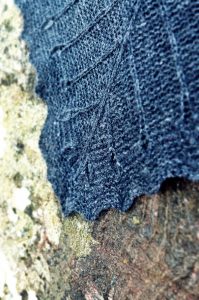 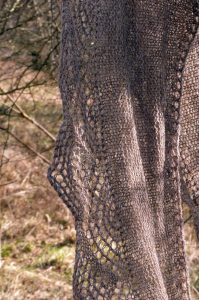 4) What made you choose to use Stitchmastery? Is there a particular feature you use most regularly or couldn’t do without? And is there anything you wish Stitchmastery could do?
I began using Stitchmastery quite early on, I think when I started working on Doggerland, around 2012 or 2013. Prior to that I was working with Excel sheets and when I was doing that, charting a shawl would take me about 3 to 4 hours. I had a trial period with Stitchmastery and realised I could cut that down to about 30 minutes. The ease of use of Stitchmastery was mind-boggling from the get-go because I didn’t need to configure anything myself – it was already done. In the beginning I mostly designed lace, and I could make repeats easily to see how things would scale up or down, and get the written instructions for it. Then I started delving into other things and it’s such a go to for me. It’s really quick and intuitive for me. The amount of stitches is fantastic, though I do sometimes have to go in and customise some stitches. I like going back in later and changing charts too, and it helps with proof reading before I send things to my tech editor. I like being able to compare different versions of a design side by side. I like that you can put in different repeats for different sizes and colour code them. It’s very malleable! And it looks pretty!
The moment I realised it could generate vector charts was a very happy day – I actually had a Facebook memories post come up the other day where I said “I have discovered vector charts – THIS CHANGES EVERYTHING!!!”
If there is one thing I could change, it would be to be able to use different colours for the fonts eg for the chart title. If I could set that with a hex code it would be great. Especially for books, the exact right colours are important! At the moment I change those in my pattern layout.
5) Please tell us about your latest publication or next exciting project!
I’ve released a few shawls lately – Shawl for an Art Lover, which was my wedding shawl; Canny Lass, which uses yarn from Whistlebare where I recently spent a day teaching, and Summerisle, which I released to coincide with teaching at Woollinn. I’ve recently started up a Patreon for writing projects, and I have a couple of collaborations and single pattern releases coming up.
You can find Karie on Instagram as @kariebookish, on her website at https://www.kariebookish.net/, and her designs are available on Ravelry at https://www.ravelry.com/designers/karie-westermann